Gunston Hall has many options that will please our diverse visitors.

An impressive amount of the original flooring, wall plaster, and woodcarving remains at Gunston Hall. Over decades, historic preservation experts have painstakingly investigated the building to learn about its construction and to discover which pieces date from the Masons’ residency.

Eleanor and Louis Hertle, who owned Gunston Hall in the early 20th century, preserved the mansion both by caring for it and by sharing information about its architecture and George Mason.  During their tenure, they allowed the house to be documented in several books, including the 1939 volume Some Historic Houses: Their Builders and their Places In History (John C. Fitzpatrick, ed.).  In her book Historic Houses of Early America (1927), Elise Lathrop suggests that were it not for the Hertles, Gunston Hall would have been lost, writing that

“After passing out of the Mason family ownership seventy years ago, various persons had from time to time bought and sold it, making changes, or allowing lack of repairs to effect others, until a few years ago it was again put up for sale.  A dairyman seemed about to acquire it, and boasted that he intended to ‘tear down all that old stuff,’ and convert it into a first class dairy farm. . .”

Lathrop explains that the Hertles’ initial restoration of Gunston Hall was a huge undertaking: they “employed twenty workmen for an entire year to restore it to good condition.”

The Hertles’ ultimate preservation decision was for Gunston Hall to become a museum after they died.  In 1949 the newly created Board of Regents undertook a new round of restoration.  The second floor especially needed attention, as it had “been rebuilt and the space so arranged as to make it agreeable for present day living”  (Fitzpatrick).

Preservation work continues.  Most recently, we installed a new fire suppression system.  Next, we will conserve the exterior stone and brick work. 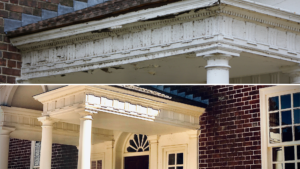 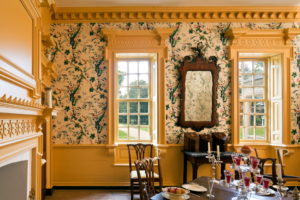 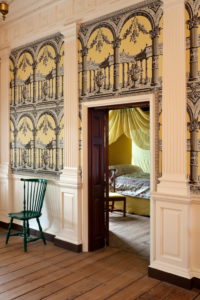 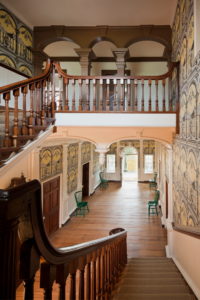 Need a vaccine? Learn how to get your shot at Vaccinate.Virginia.gov or call 1-877-VAX-IN VA. Language translation and TTY services available. Visit: https://vaccinate.virginia.gov/

You can find out more about which cookies we are using or switch them off in settings.

This website uses cookies so that we can provide you with the best user experience possible. Cookie information is stored in your browser and performs functions such as recognising you when you return to our website and helping our team to understand which sections of the website you find most interesting and useful.

Strictly Necessary Cookie should be enabled at all times so that we can save your preferences for cookie settings.

If you disable this cookie, we will not be able to save your preferences. This means that every time you visit this website you will need to enable or disable cookies again.